John Grimes and The Baltic

Brendan Grimes’s talk to the November meeting of Skerries Historical Society was a very personal story. ‘John Grimes and The Baltic’ traced the career of Brendan’s grandfather from his first trip to sea as a fifteen year old ‘ship’s boy’ on the Red Rover to his early death aged 41 when the ship of which he was the Master, the Baltic, was lost off Fanad Head, Co Donegal.
John Grimes was a natural sailor – it was in his blood – records show there were many member of the Grimes family serving as Ship’s Masters going back to the 1860s (when William Grimes, Master of the Herald, had a little trouble with Customs which had to be ironed out with a solicitor’s letter!). John started out on his father’s ship but within five years he had earned his Master’s Ticket and was in charge of the Village Belle – although on his first trip as Master his father went along as Mate, no doubt to nudge him into making good decisions that would keep both ship owner and crew happy.
Most of the Grimes mariners were engaged in the carrying trade – they moved various cargoes around the ports of the British Isles and sometimes even further afield, spending months away from home. Ships’ manifests show that the actual movement of goods was the least of a Master’s worries – bringing a cargo from Ireland to a port in England, Scotland or Wales might only take a couple of days.

The time consuming part of the job was loading and unloading the cargo – even finding a cargo that could be carried at a profit was a real headache as John’s letters home make clear. Nothing irks a sailor so much as kicking his heels in port with nothing to do.
Only a few of Brendan’s grandfather’s letters have survived the century since his death but those few pages contain little stories which truly bring him to life. Like the time he went ashore to buy supplies for a trip and, laden down with his purchases, jumped aboard a train to bring him back to the harbour. But the train had other ideas and dumped him miles from where he needed to be. With no train due for hours he walked the thirteen miles back carrying 23 pounds of meat – food for the whole crew – and was so cross at the end of it that he drank far too much and ended up getting sick. In his letter home to his wife he asks her to write to the friends who witnessed his embarrassment and apologise on his behalf. Not every man would own up so honestly to his own shortcomings!
Brendan’s talk – containing many other snippets concerning a mariner’s life a century ago – will shortly be available for SHS members to have a look at in the archive. 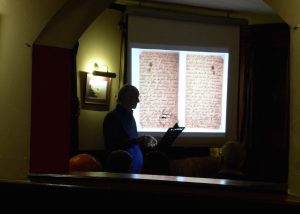 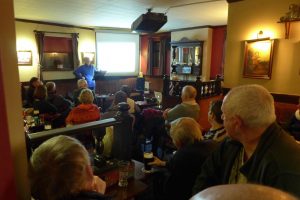