The Kieran Family, Skerries
The Skerries Historical Society March presentation was ‘The Kieran Family, Skerries’ by Gavin Butler and the crowd who came along to the talk in The Bus Bar were treated to a masterclass in researching family trees. Gavin has not only been gathering data about his forebears for over twenty five years, he has meticulously recorded exactly where each and every nugget of information was garnered from. His list of sources is impressive, particularly when you realise that very little was available on the internet when he started in 1990.

Gavin’s focus was his mother’s family who established the original Skerries malting house in the 19th century. He began his story in 1781 with the birth of George Kieran who can be found, aged 40, on one of the earliest census records extant, that of 1821. He was a clerk in a corn merchants in Navan and lived quite well: the family, consisting of his wife, Eliza, and two sons, Joseph and Matthew, were able to afford a live-in servant.

One of the loveliest things about Gavin’s talk was that he was not afraid to mention the low points in his family history as well as their moments of triumph. So we learned that in 1830 poor George was declared bankrupt and insolvent in the newspapers. It seems he tried to revive his fortunes by a foray into the malting business – converting raw grain to malt for making beer or whiskey – but he had no licence to be a maltster and was convicted and fined £25 in 1832.

Despite this setback, the Kierans had got a taste for brewing. In the 1830s George’s eldest son, Joseph, founded a malting house in Lusk and followed it up within a decade with a second one in Skerries. The Skerries malting house, located where The Maltings estate now is, was an expensive undertaking. There was a pre-existing kiln used for roasting the grain but everything else was built from scratch at a cost of £1,500 – which was a tidy sum in those days.

The Kieran fortunes seemed to be on the rise. They also supplied the less fortunate in Balrothery and District Workhouse with barm (the foam from the top of the beer) to be used in bread making during the difficult times between 1849 and 1879. Joseph’s son, John, followed him into the business but John did not inherit his father’s talent for brewing. Perhaps he was too enthusiastic about it – he was convicted of installing two whiskey stills in the Skerries malting house without getting a licence for them.

A failure to abide by the licensing laws wasn’t the only way in which he resembled his grandfather – he ended up being declared bankrupt after the Lusk malting house, which he was running, failed in 1873. The Skerries business continued well into the 20th century with The Malting House pub being the perfect reminder of Skerries’ brewing past. 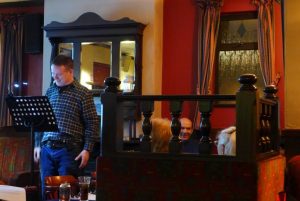